Glasnost is Tcherno Kormann J-Jacques, El Puce Leuzinger Christophe, Tiennot Coigny Etienne, Dany Peter Daniel, Darus Petracca Dario and La Pive Thélin Yves. The band's style is somewhere between Noir Désir, Matmatah, Soldat Louis as well as festival rock riffs that are reminiscent of Dropkick Murphys with a Swiss twist. Add to this a fair helping of Celtic influences like cider and Guinness which mix to create the band's particular style, giving audiences the urge to sing and dance, even to songs they've only heard for the first time. The current repertoire and the arrangements are all originally inspired by the group.

Lyrics are by Tcherno, the music is a reflection of all the Glasnostians. Rhythm guitars are played one after another or together in varying styles and ways by Puce, Tiennot et Tcherno, depending on the track. An Irish flute, Heidi style, brightens up the riffs too. Drums are Dany's domain and he brings songs to life with his unmatched sense of rhythm. Softening the musical edges a bit is Darus on bass, a relatively recent passion. An accordion and keyboard create melodies that envelop the band's music in the magic of the Celts, with carefully chosen notes from La Pive.

Topping it all off is Tcherno's throaty 3am vocals, which give additional Celtic overtones to the group. In short, GLASNOST knows its way around rock music and how to perform - the raging tracks, outbursts and explosive lyrics, not forgetting the festive side to performing even when the songs are sad, without pandering to the blandness of today's variety acts. 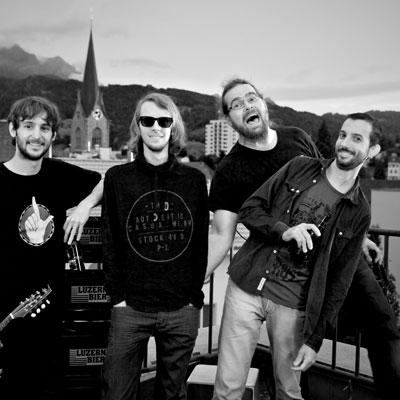